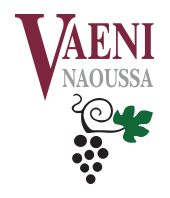 The VAENI Naoussa Co-op is one of the most highly progressive wine-producing units in Greece, representing 50% of the local wine production, area renowned for its exquisite red wines. The members of the co-operative are 200 experienced vine growers, driven by their drive for quality wines. This vital human factor, combined with the use of advanced technology, guarantees the quality of the wine, which is mainly sourced from “Xinomavro”, an indigenous variety that dominates northern Greece.The wineries are staffed with qualified experts and operate according to the European standards. It is situated within the boundaries of the viticultural region, which is an advantage for the product itself. Summarizing co-operation’s main characteristics are its experience, reliability and an artistic feeling.

Vaeni Naoussa Coop is one of the most historic trade organizations in Greece. Since 1983 when it was founded operates as an Agricultural Cooperative located in Episkopi of Naoussa (prefecture of Imathia Central Macedonia NUTS2 region).Under the new Law 4384/2016 for Agricultural Cooperatives its statute was harmonized and codified. It has 200 vine growers members all located at the appellation zone of Naoussa.

Vaeni Naoussa is one of the 26 wine producers of the zone and the only of cooperative nature. In 2015 according to 5907/28.03.2017 response of the competent department of the Region of Central Macedonia, the total number of vine growers who declared wines of the Xinomavro variety for the production of the Naoussa PDO was 198. Vaeni Naoussa declared 6.409.45 HL l Xinomavro for PDO winescoming from 101 vine producers of the zone. This make Vaeni Naoussa Coop representative of the Naoussa PDO wine of Xinomavro variety, as it represents 51.1% as a proportion of the number of producers. In addition the volume of the PDO Naoussa Xinomavro marketable production of corresponding to Vaeni Naoussa for the same year was 45% of the total.

The town of Naoussa sits at the foot of Mount Vermion, at an altitude of 330m above sea level. The old town was founded in the late 14th-15th century AD.According to the ancient Greek mythology, Semeli, the mother of God ionysos, lived on the slopes of Mt Vermion. It is also believed that the magnificent dancer Silinos, the faithful companion of the God of vineyard and wine, was born in this area.

Today's Naoussa, apart from enjoying the privilege of unspoilt natural beauty, carefully maintains its age-old heritage. At the same time, there has been significant economic development mainly by supporting and promoting Naoussa's vineyard and wine.